(Union Mills, IN) - A La Porte County woman has moved on but will never forget the sight of a burning cross outside the home of her biracial family nearly 30 years ago.

A then 19-year-old Hanna man, who admitted to making the cross out of scrap lumber at his home and setting it ablaze at the residence, said his actions were not racially motivated.

Allen Stevens, now a local political figure, said he soon turned himself into the police and has led his life in a much more positive fashion.

Debra Dudley, 43, said her family moved to Union Mills to escape deteriorating inner city conditions in East Orange, New Jersey. Dudley said her father unexpectedly died from an aneurysm a few months later. Dudley said her mother was now alone raising her and her two teenage brothers and trying to figure out how to make ends meet.

Several weeks later, in March of 1993, Dudley said she wished her father was there even more, to protect her while watching the six-foot gasoline-soaked cross burning at night in their driveway.

“I was scared. I was terrified. I distinctly remember just missing my father and wishing my father was there,” Dudley said.

According to a police report about the complaint, Stevens told investigator 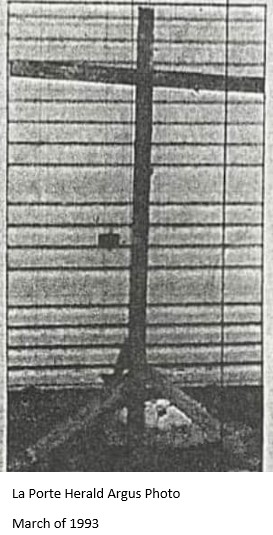 s his actions were not motivated by racial hatred.

The now 48-year-old Stevens said he made a mistake in taking the law into his own hands in a "horribly short-sided, ill-conceived way." He also said the remorse and embarrassment  he felt from his actions caused him to step forward and turn himself into the police a few days later.

According to court records, Stevens was given 180 days on probation and 20 hours of community service for Class A misdemeanor trespassing. He was also required to write a letter of apology to the family.

According to police, a 17-year-old boy, who Stevens described as a friend, was also involved. His friend, along with Dudley and her two brothers, were students at South Central School at the time. Stevens was already a South Central graduate.

Stevens said the change he felt from his guilty conscience was immediate, and he continued leading a life opposite from his previous actions while married and raising three children.

“I’m far from a racist. I got a track record that proves otherwise,” Stevens said.

Stevens is chairman of the La Porte County Republican Party and a South Central School Board member.

Since becoming party chairman in March of 2021, Stevens has reached out to African-Americans and Latino residents, feeling their values are no longer represented by Democrats. Stevens said he's also attempted to increase the number of local political candidates and precinct committeepersons who are minorities.

Recently, the La Porte County Commissioners voted to give county employees the day off with pay for Juneteenth, a federal holiday marking the end of slavery. Stevens was among the people pushing for the action. He also favored the commissioners adopting a hiring ordinance to increase the number of county employees who are minorities to reflect the percentage of their population in the county.

After keeping quiet about the incident, Dudley said the upcoming November 8 election had no bearing on her speaking publicly. Instead, Dudley said she wants people to know what he did so they can judge Stevens based on all the information. She also said she hopes Stevens has changed like he claims but isn't convinced.

“I don’t have any political agenda. I just want people, in general, to just be aware the incident did occur. Just be aware,” Dudley said.

Dudley works in the Adult Protective Services Division of the La Porte County Prosecutor's Office. Prosecutor John Lake, a Democrat, is running for a second term against republican Sean Fagan.

Stevens alleged light being shed on his past is politically motivated.

“I have a record to prove I’m far from some racist or some kind of animal or something I’m sure the Democrats are going to try and portray me as,” Stevens said.

Read Allen Stevens' press release about the cross-burning in Union Mills and his involvement here.