(La Porte County, IN) - The attorney for La Porte County government is thanking a political opponent, saying both versions of his "Dump Sheila, Fire Friedman" campaign signs are helping the defamation of character lawsuit he filed against him.

Stabosz has admitted to paying for both versions of the signs, something that Friedman claims prove guilt on the part of Stabosz.

The original version of the sign shows a picture of Friedman with a bag of money beside his head, while the latest edition shows Friedman wearing a pair of sunglasses with dollar signs on the lenses.

Stabosz said the signs communicate that Friedman profits from his control of decisions made by elected officials such as La Porte County Commissioner Sheila Matias.

Stabosz has often referred to Friedman as a puppeteer and Matias as one of his puppets.

"I want to thank Mr. Stabosz for publicly acknowledging what we already knew, which is he created, produced, paid for, and placed those signs. He's clearly done this without the benefit or advice from counsel because all he's done, paying out of his own pocket, is help us prove malice in my defamation case," Friedman said.

Friedman said the standard for proving defamation of character is a defendant knowing their actions against someone were false or in reckless disregard of the truth. 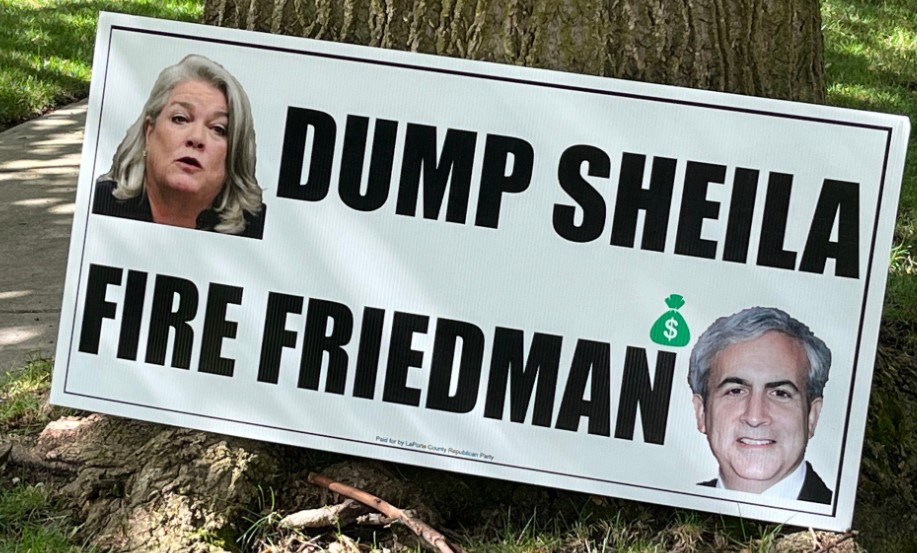 He said Stabosz is fully aware a judge ruled after a court hearing a few months ago that he failed to show just cause for having the defamation case against him dismissed.

"He knows for a fact that Elkhart County Judge Stephen Bowers has stated Mr. Stabosz has provided no evidence to back up claims of billing fraud, conflict of interest, or any wrongdoing," he said.,

"He's got nothing but a blinding personal hatred, and all he's done is helping us prove our case of defamation," Friedman said.

In response, a chuckling Stabosz said the judge's ruling came at a point in the case where he didn't have to offer proof but could, had the legal proceedings reached that point.

He also called the signs a form of comedy, similar to harmless skits about public officials on programs like Saturday Night Live or cartoons of political figures in the newspapers.

"There's nothing in that sign. It's satire. There's nothing defamatory about showing the picture of someone with the money bag next to them or putting sunglasses on them with dollar signs up," he said.

Stabosz also said even though he intended for the signs to communicate "what's really going on" in county government, he maintained he was speaking the truth about Friedman, and it's up to Friedman to prove at a high level that his claims against him are false for the case not to be thrown out.

The Indiana Court of Appeals has agreed to hear Stabosz's appeal of the lower court judge's ruling not to dismiss the case.

"I would love to go to trial if we have to, but it's not going to go to trial because this lawsuit is frivolous. I'm confident with 100-percent certainty that the things that I have said are all defensible," Stabosz said.

The Associated Press and several other media organizations have intervened in the case out of concern for public comment, and the work of journalists could be restricted depending on the outcome of the appeal.

They want the appellate court to base its ruling on a standard that doesn't infringe upon freedom of speech in areas like public comment and the ability of journalists to get to the facts.

In a letter dated August 2 to Friedman's attorneys, Steve Key, legal counsel for the Hoosier State Press Association, said he felt their case against Stabosz was strong on the point of malice.

Key also said the media organizations would not have become involved in Stabosz's appeal had the lower court judge, in making his ruling, used the standard they preferred to avoid infringing on First Amendment rights.

"Our position is strictly focused on the legal standard required for a motion to dismiss to be defeated," Key said.