(La Porte, IN) - The Democrat Party candidate for La Porte County Sheriff has picked up an endorsement. The Indiana Fraternal Order of Police endorsed Andy Hynek.

Hynek said he felt the endorsement was significant, given the FOP is the largest organization representing sworn law enforcement officers nationwide.

“I am extremely humbled and honored to have the endorsement of my peers. It’s just a really good feeling,” Hynek said. 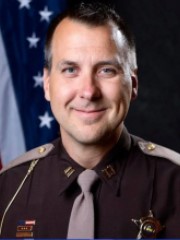 Hynek said his values also reflect the values of the Fraternal Order of Police, ensuring the development, training, safety, and compensation of police officers.

“These are the same core values I plan to run the sheriff’s office on once elected,” Hynek said.

Republican Ron Heeg is the opposing candidate in the November 8 election.