People relished meeting Dawson, who played six seasons at Wrigley Field in a career that began in 1976 with the Montreal Expos.

Cody Looney, 24, of New Buffalo, had Dawson sign his Cubs jersey and a baseball, then sat down with his father, Bobby, to eat barbecue beef sandwiches offered to everyone in attendance.

“He’s probably the only sports figure I would actually come out and see. This is really cool,” Nannfeldt said.

“It was really neat,” said Joe Appelget of St. Joseph.

Scott Buchanan made the drive from Paw Paw and walked away with a 1977 Topps Andre Dawson rookie card from his collection since childhood signed by the former player nicknamed “The Hawk.”

“It was awesome. It was surreal,” Buchanan said. 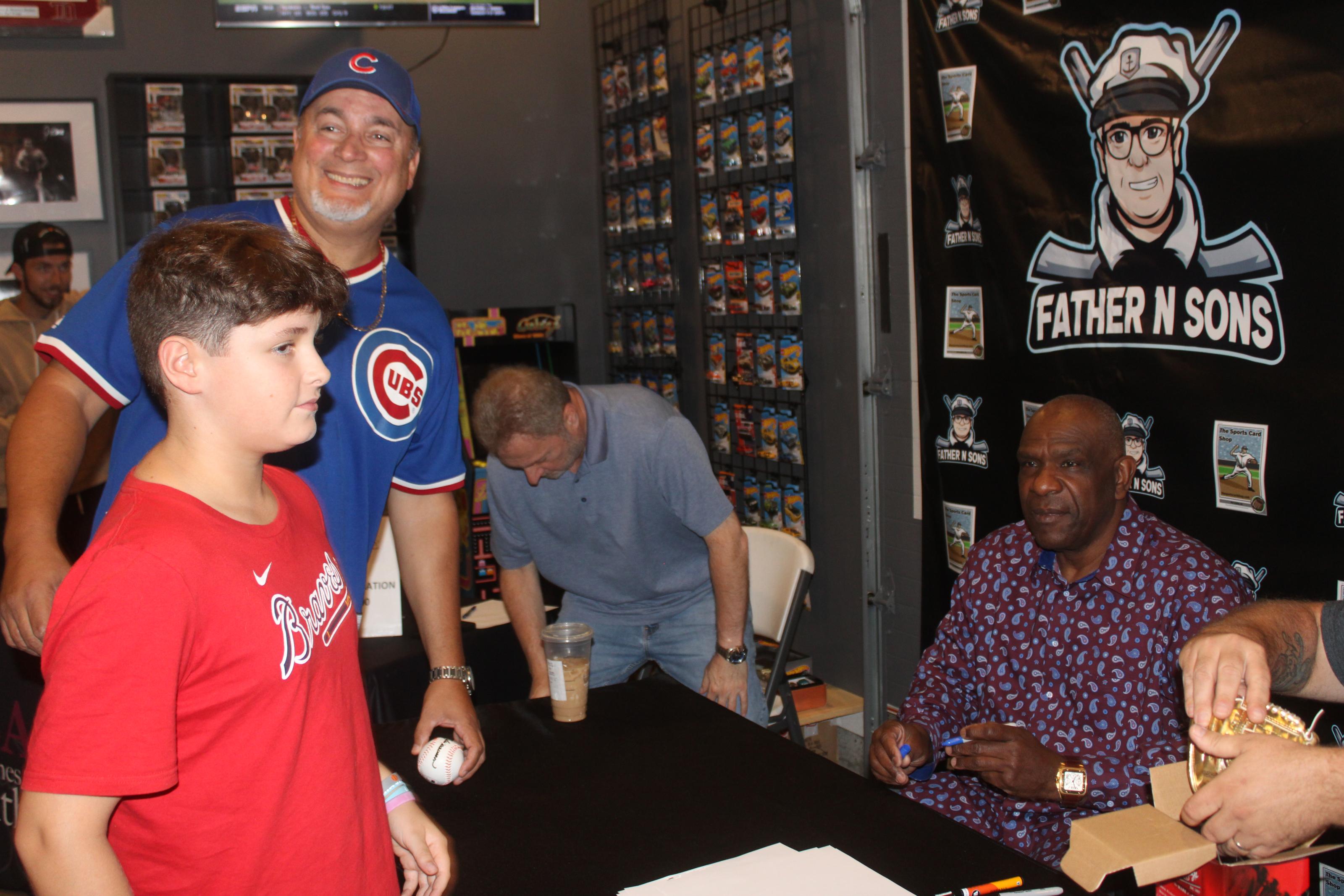 George Colon wearing a Cubs hat and jersey came from La Porte with his wife, Erin, and 12-year-old son, Andrew. When he handed Dawson a baseball to sign, the 56-year-old Colon choked up a bit with emotion.

“Even though we’re grown men, we’re still kids on the inside,” Colon said.

Dawson, a former eight-time National League All-Star player, is busy nowadays, traveling primarily throughout the Midwest to sign autographs at similar venues. He also owns a funeral home in Miami, Florida, where he grew up and still lives.

Dawson said the funeral home landed in his lap as an investor 12 years ago, and he had to decide whether to sell or keep it. He answered what he felt was his next calling and chose to retain ownership.

Dawson is actively involved in what’s become a family-operated business.

“It’s a product of the community, and I wanted it to stay that way,” Dawson said. 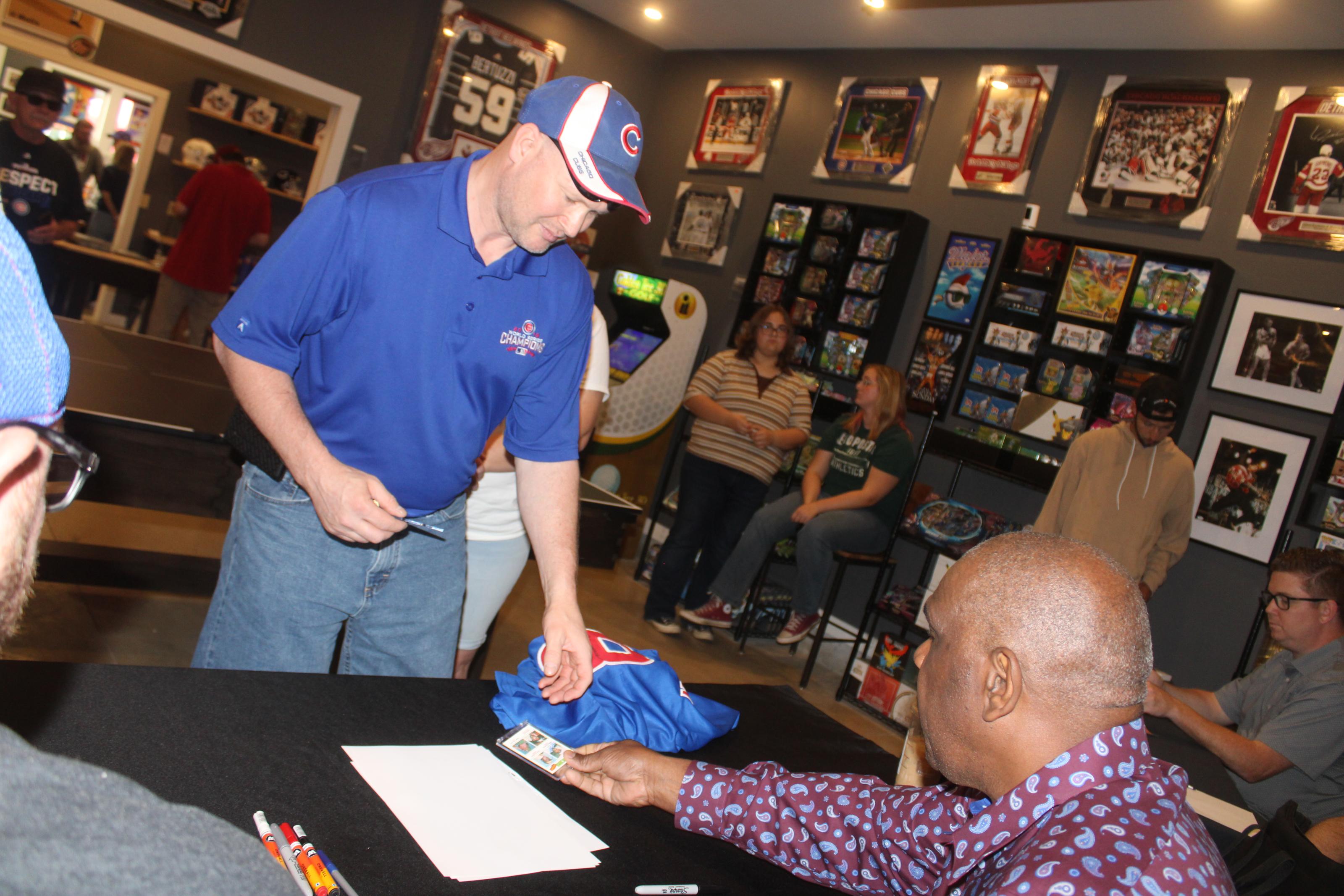 Rex Gotcher, who opened the card shop nearly two years ago, said Dawson came here after contacting him about his interest in having a former athlete make an appearance at his establishment.

Gotcher said he was given several names to choose from and settled on Dawson, elected to the National Baseball Hall of Fame and Museum in Cooperstown, New York, in 2010.

Dawson came the day after he appeared at the “Field of Dreams” game between the Cubs and Cincinnati Reds in Dyersville, Iowa.

The game is at a 3,000-seat stadium next to the playing field where the hit 1989 baseball movie was filmed beside a corn field. During pre-game ceremonies, Dawson was among the current and former players emerging from the stalks of corn onto the playing field. He joined other Cubs Hall of Famers, Billy Williams, Fergie Jenkins, and Ryne Sandberg walking out from the corn. 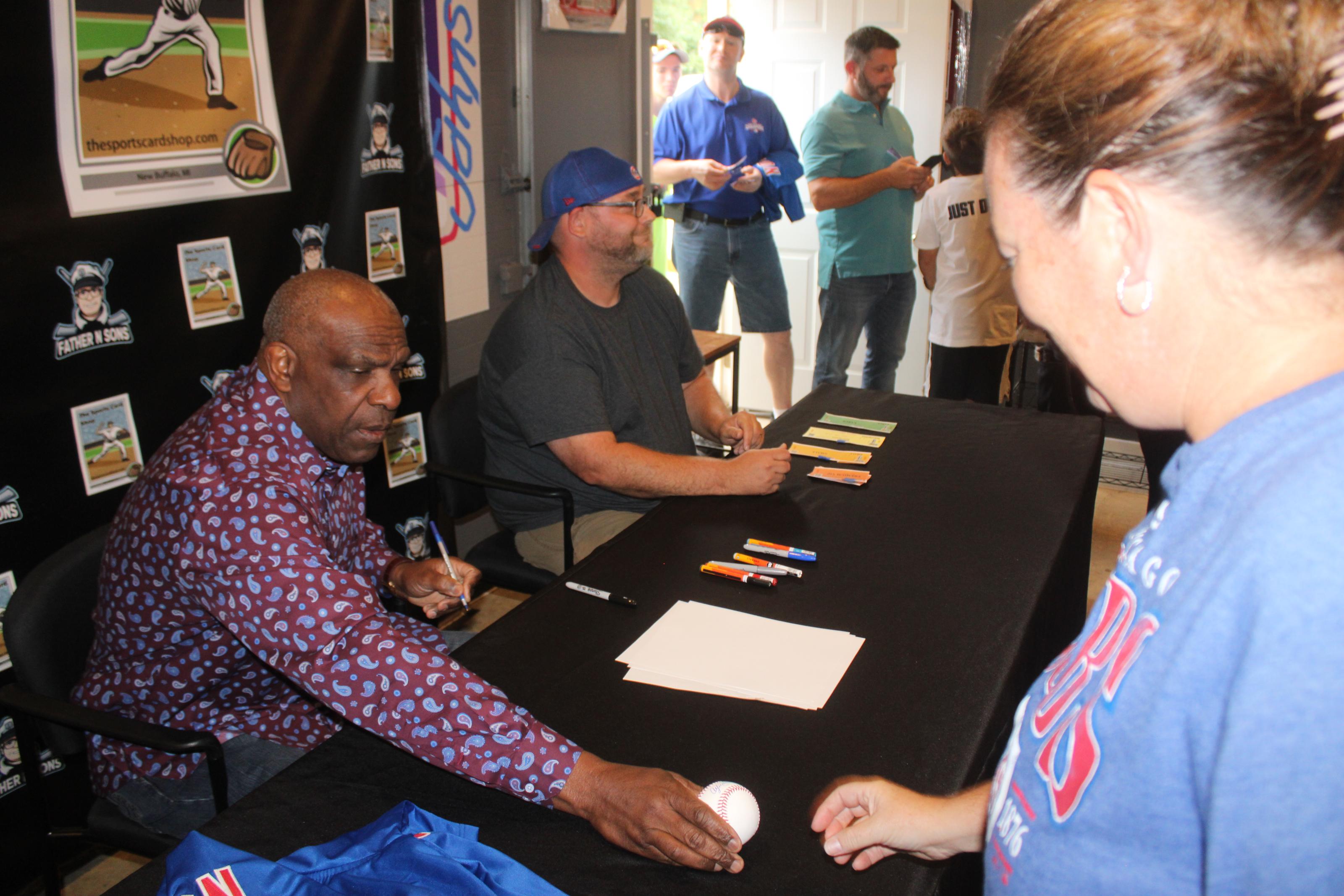 doing some work for the Miami Marlins organization. He quit after two pitches when the muscles in the calves of his legs began tightening.

Dawson said he still enjoys the game as an outsider and when he puts on a uniform in spring training to help analyze and work with upcoming players in the Cubs organization.

He also enjoys his annual visits to Cooperstown for the festivities before a new crop of former players are inducted into the hall of fame.

“It’s good to see the guys. The older guys I enjoy for the most part because they have stories to tell, and you enjoy sitting around listening to them,” Dawson said.