(La Porte, IN) - A new fire department lake rescue boat with ability to fight house fires near the shoreline is already reaping dividends in LaPorte.  The over 22 foot boat, docked in Pine Lake during the summer, is also used to reach people seriously injured from mishaps in the water.

After it first arrived in August, firefighters used the fast moving watercraft to reach an individual partially paralyzed from a water skiing accident on Pine Lake and a person floating on her life jacket with a broken leg after falling in between a dock and boat.  “It’s been paying off,” said LaPorte Fire Chief Andy Snyder. 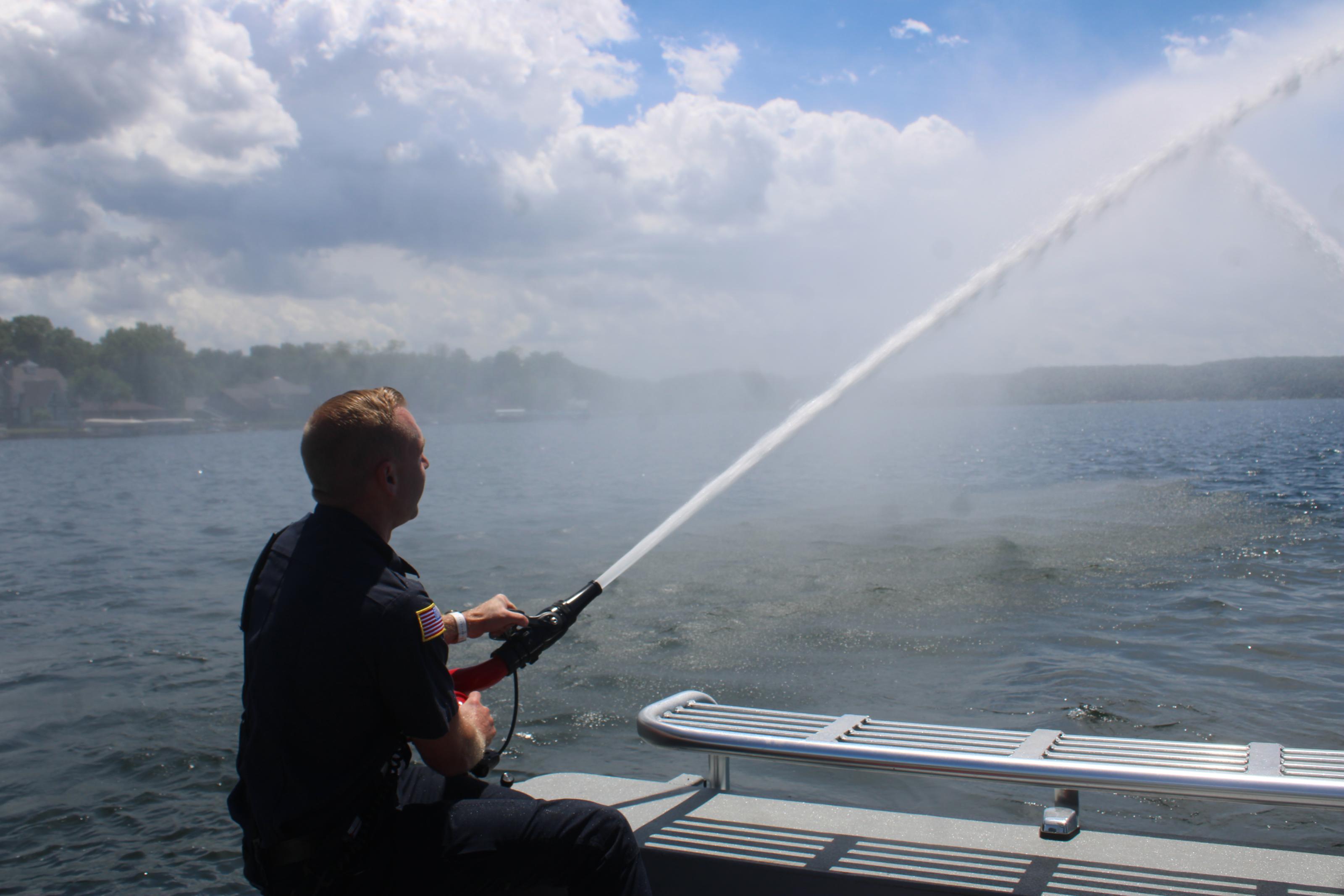 Equipped with flashing lights and a siren, the boad has not responded to any major rescue calls since put back in the water in May.  However it was used recently to put out a fire in a wooded area beside Stone Lake.  Snyder said it appears a trash can was intentionally set ablaze.  After catching some debris on the ground on fire, the flames spread a short distance into the woods. 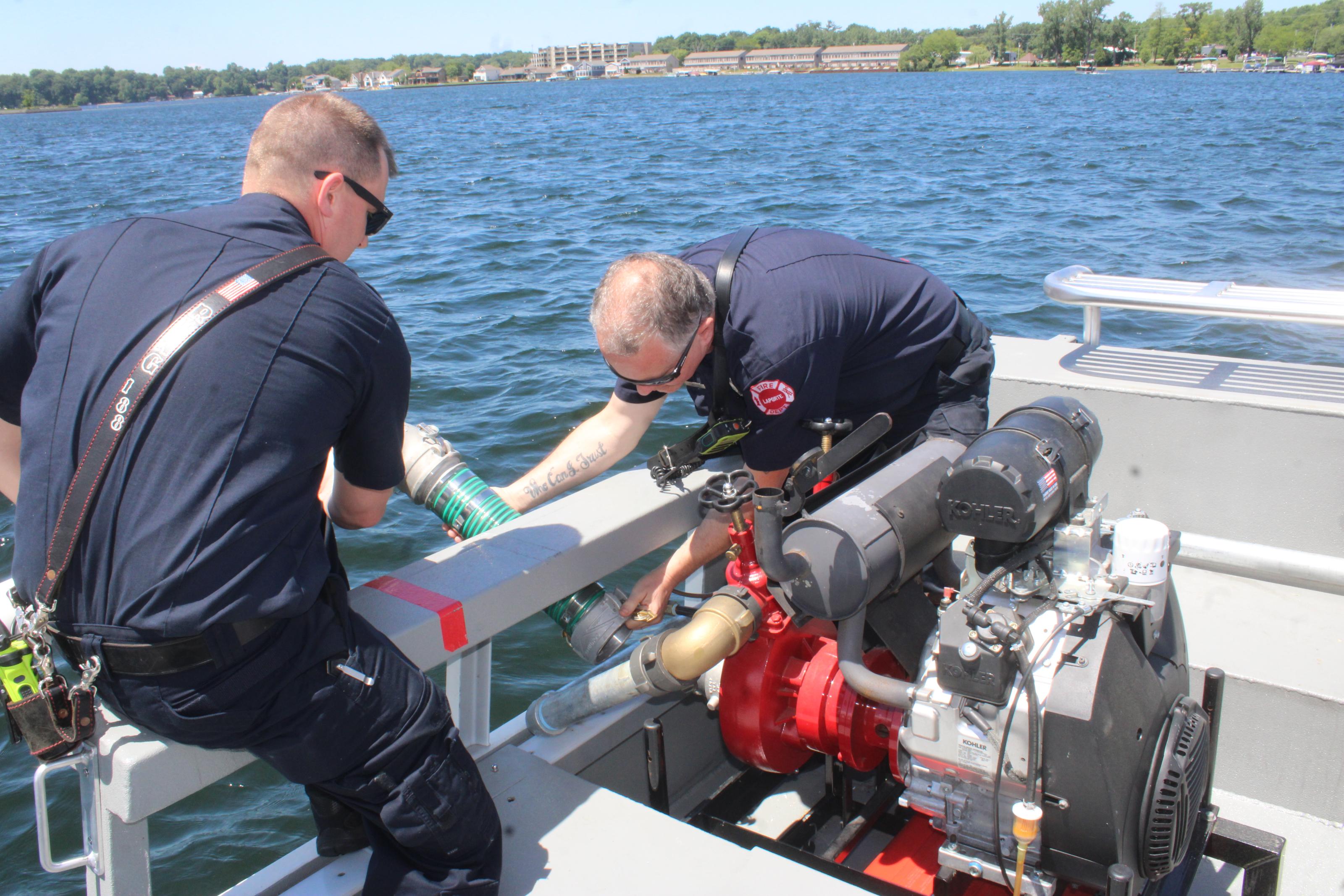 The boat raced across Pine Lake and through a channel to Stone Lake to put out the fire from the shoreline with two water guns on the deck, emitting up to 750 gallons of water a minute.  Snyder said the fire, about 75 feet from the boat, was well within reach of the guns, which can send water at distances of about 150 feet.

He said a truck would not have been able to get 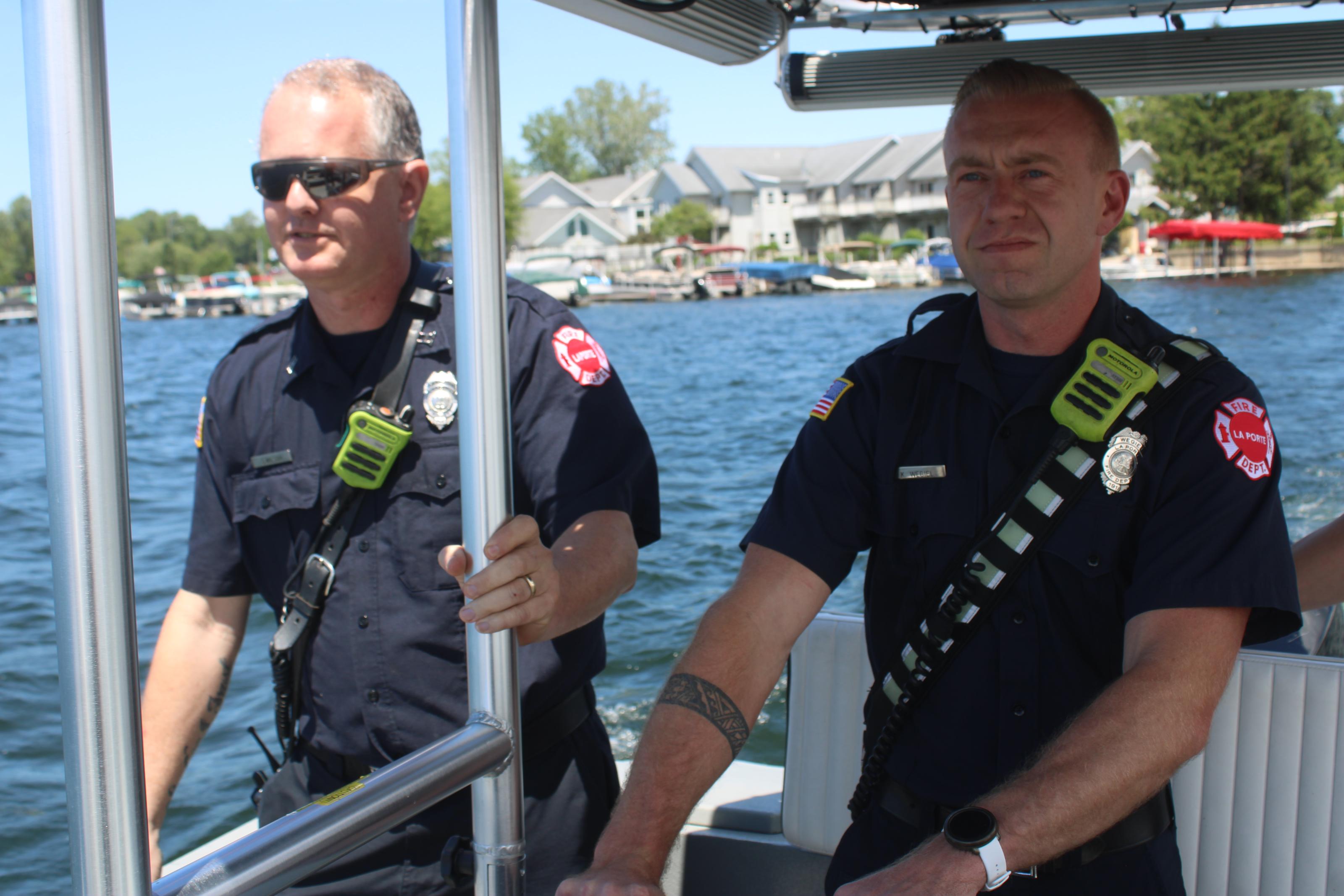 close enough for hoses to reach the fire deep in a wooded area near Cummings Lodge.  “Luckily, the deck guns were able to reach it from the lake and they extinguished the fire,” he said.

The tips of the water guns can be removed and equipped with hoses if water has to be carried on foot to fires at greater distances away.  A pump on the boat draws water from the lake.

He said the boat could also be called to assist with house fires if narrow roads make it too difficult for trucks to quickly reach some of the lakefront dwellings or extra time is needed to tap into fire hydrants, which are not always conveniently located around the lakes.  “This just supplements what we would be able to do from the road,” he said.

Snyder said the boat cost $104,000 and has a 200 horse power engine and doors that open close to the surface of the water to slide patients inside.

The boat replaces an older and much smaller watercraft that is still in service for any rescues on smaller bodies of water in the city, like Clear Lake and Fish Trap Lake.  That boat has just a 15 horse power engine and no doors, which forces patients to be lifted over the edge and pulled in.  The old boat also doesn’t have a built in water suppression system.

He said the old boat, which is kept at the fire station, also has to be transported to the lakes while the new boat is able to remain docked.  This increases response times further on the heaviest used bodies of water.

Capt. Scott Wilson said the new boat is also equipped with sonar to locate bodies or even air bubbles from someone beneath the water before they drown.  “Hopefully, we never have a body recovery.  We have had them in the past.  This will make it a lot quicker and easier for us to find them and if we can get to somebody in the right amount of time hopefully be able to rescue them,” he said.

Snyder said the Healthcare Foundation of LaPorte paid half the cost of the boat.  “Hopefully, we will not have a lot of use for it this year but it’s there is we need it,” Snyder said.