(LaCrosse, IN) - A La Porte County farmer lost machinery and tools and three classic cars to a fire that destroyed his barn and ran the municipal water tank dry. His grandfather initially owned one of the cars, a 1975 Oldsmobile Delta 88 convertible.

“That’s the one that hurts the most,” said Bobby Younggreen, who’s lived on the farm in his family for about a century since 1980.

Younggreen, 60, said he was notified about the early Monday fire while on delivery, and his drive back home from southern Indiana seemed like the longest in his 40-year career as a full-time truck driver.

“I was kind of in shock,” Younggreen said.

The cars and farm equipment, including a combine and two tractors, were inside his 22,000 square foot pole barn, which collapsed during the fire at his farm in LaCrosse. The fire was intense enough to engulf a pick-up truck parked outside the barn in flames. 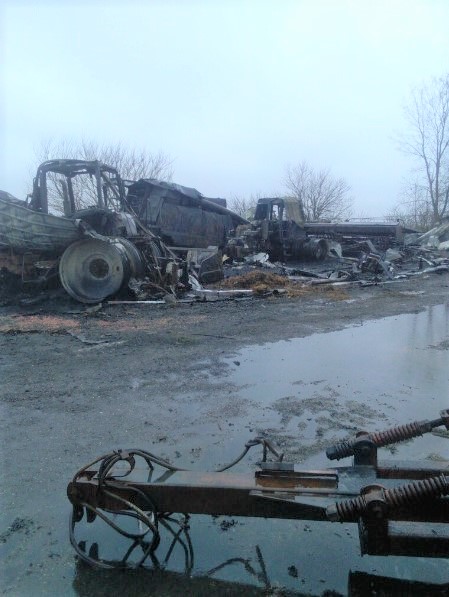 Younggreen said he has insurance to cover the total loss estimated at a “couple hundred thousand dollars” in equipment. However, he wasn’t sure about the cost of building another pole structure or the value of the cars.

The other destroyed vehicles were a 1992 maroon Chevy Corvette convertible and a 1983 Cadillac.

Younggreen said the Oldsmobile was passed down to his father, who left him the car when he died more than 10-years ago.  He purchased the other two classic vehicles several years ago and took all of them on rides during the summer. The cars had only about 30,000 miles on their odometers and were still in their natural state.

“They were pretty nice. They were all stock,” Younggreen said.

LaCrosse Fire Chief Aaron Rust said the cause of the fire remains under investigation, but one of the possibilities involves a battery charger overheating. A half dozen battery chargers were plugged into a power strip to keep his batteries fully charged for drills and other power tools he uses on the farm.

Younggreen's wife discovered the fire after hearing what sounded like shotgun blasts from the tops of torches blowing off, perhaps from the heat pressure created inside the devices.

Younggreen raises corn and soybeans on 325 acres and rents another 80 acres to grow hay. He was delivering steel coils from Valparaiso to Rockport close to the Ohio River between Evansville and Louisville when notified about the fire.

Town Councilman Justin Kiel said a temporary boil order was issued for the town of more than 500 residents because of a drop in water pressure in the lines caused by the municipal tank on a tower running dry.

The tank was emptied from the amount of water pulled to fight the fire being faster than the volume entering the tank from the water treatment plant. As a result, residents had no water until the tank started filling up after the fire.

“We were able to get it back online fairly quickly. It was a relatively short disruption,” Kiel said.

Boil orders are required by the Indiana Department of Environmental Management whenever there’s a drop in water pressure that could allow contaminants into the system. Kiel said the order would be lifted once test results show the water is free of impurities.

Upon arrival, Rust said the barn was already engulfed in flames, and tanker trucks were bringing water from other sources before the tank ran dry. He said the focus was on keeping the fire from spreading to the nearby house, which was not damaged.