(Bloomington, IN) - An aquatic lizard-like species whose head resembles a dog might not mean much to farmers, but it’s quite a sight for people with one dangling from the end of their fishing pole.

“It’s kind of a Mudpuppy call out,” said Nate Engbrecht, a herpetologist with the DNR out of Bloomington.

People statewide are asked to report sightings and submit pictures of what they saw for DNR to verify it was a Mudpuppy. The location and date of the spotting should also be included with the entries.

Engbrecht said current data indicates the four-legged salamanders, which can reach up to 18 inches long and live for 30-years or more, have long been declining in population.

That’s not known for sure, though, because they’re hard to see from living strictly in the water. 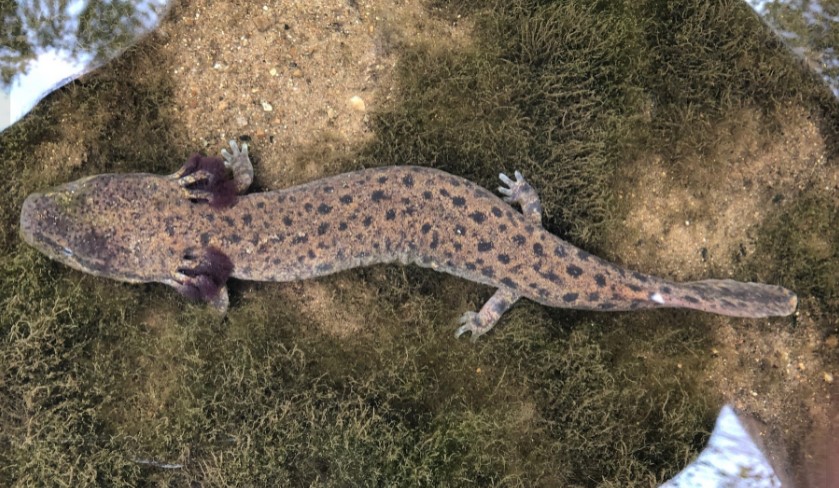 Engbrecht said the Mudpuppies are often spotted on bottoms of lakes and rivers in clear shallow water during cold weather.

Sometimes, they’re seen through holes cut into frozen lakes by ice fishers or from shore once the ice starts melting and into spring. Then, they head out to deeper, murkier water as conditions warm up.

“It seems like we get most of our Mudpuppy reports from the public during the cold season,” Engbrecht said.

Most other sightings are when they’re reeled in on the line of a fishing pole meant for bluegill, crappy, bass, or some other fish during all parts of the year.

“It’s difficult to get good numbers on them especially from around the state.  They’re tricky to locate,” Engbrecht said.

In addition to their dog-like face, Engbrecht said the Mudpuppy’s unique features include feathery gills on the side of their head.

The data gathered from the public will be added to the information obtained from another Mudpuppy call out in 2020. Engbrecht said sightings were reported from all parts of Indiana, especially in the northeast part of the state, which has many inland bodies of water.

Sightings were also reported as far north as Lake Michigan and in the Ohio River.

Engbrecht said there could be an effort to restore their numbers depending on what the data reflects once sufficient information has been collected.

Like any living creature, the salamanders play a role in maintaining balance in ecosystems. But, unfortunately, Engbrecht said they’re predators and preyed upon as food sources.

The Mudpuppies are also critical to the survival of salamander mussels. The mussels attach to the gills of Mudpuppies to obtain nutrients after being born. They then later detach from the Mudpuppies and feed on particulates in the water.

Engbrecht said the feeding has a filtering effect that leaves the water cleaner.

The chance of a Mudpuppy winding up in the pond on a farm is slim to none unless the pond is tied into a lake, river, or stream because the creatures never leave the water.

Engbrecht said the response to the call for reported sightings has been tremendous since issued on January 25 in a post on the DNR’s Facebook page.

“A lot of people responding are posting photos of other types of salamanders but we certainly have had some legitimate Mudpuppy photos submitted from parts of the state,” Engbrecht said.

Engbrecht said the data would be laid out to show where the populations are greatest and which bodies of water might have more or fewer Mudpuppies than anticipated.

“It’s just more of building on the knowledge base of where these sightings occur. That’s kind of what this process is really,” Engbrecht said.

Sightings and other information can be submitted at HerpSurveys@dnr.IN.gov. People can also contact DNR at (812) 334-1137.