(Michigan City, IN) - A wild turkey was back at it again this morning.

Since before Christmas, the bird has been hanging out at Johnson Road and Michigan Boulevard. The turkey often wanders out in the middle of the intersection in Michigan City near Trail Creek, causing issues for traffic.

Warren Smith was on his way to work when he spotted the turkey in the roadway before eight o’clock this morning. Smith said drivers were veering around the turkey, which was not budging. 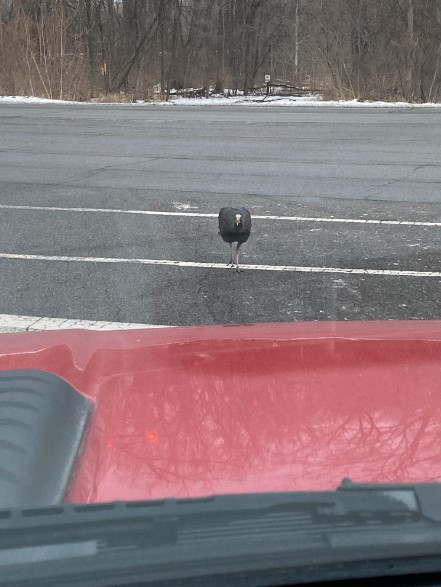 “He’s just standing there acting like he owns the road,” Smith said.

Smith said he was stopped at a traffic light when he took a picture of the turkey standing on the asphalt surface. The turkey eventually migrated toward him and stood beside his front bumper momentarily.

Police urge drivers not to stop or get out to try and shoo away the turkey because of the safety risk involved in doing that. The Indiana Department of Natural Resources is looking into the situation to see what can be done to eliminate what seems to be a hazard.