Jeff Miller of La Porte is behind the recent postings of cartoons critical of COVID-19 not being taken seriously enough by decision-makers in the city. The latest cartoon portrays Mayor Tom Dermody while holding a basketball piloting the infamous hydrogen-filled Hindenburg blowing up above the Civic Auditorium where the tourney is being played.

What looks like a COVID-19 cell holding an orange “La Porte Proud” sign is at the bottom of the picture. The blimp-like German aircraft exploded in mid-air in 1937.

Mayor Tom Dermody said there are always critics no matter the issue, and safety precautions like social distancing are being taken at the Civic Auditorium, which has about 1,000 seats available for each game.

Other precautions include providing hand sanitizer and masks for fans entering the building and recommending spectators wear masks. He said the precautions followed Centers for Disease guidelines and were worked out between officials with the city and other groups involved with the tourney, like the conference whose teams are playing in the invitational.

Dermody also noted that football and basketball games attended by tens of thousands of people are still being hosted nationwide at the college and professional levels. Dermody also said people's response to the tourney had been nothing short of positive.

“There are always people who sit back and won’t step up to make the community better. They just like to have their 15 minutes of fame for being critical of others trying to make our community better,” he said. 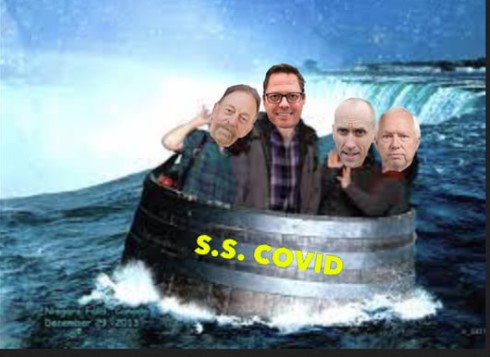 Four more games are scheduled today, with another four games scheduled for Saturday.

Other cartoons posted by Miller include the S.S. COVID with Dermody and other officials on the floating barrel as it heads toward the edge of what looks like Niagra Falls.