(La Porte, IN) - A La Porte man is being praised for helping to put a child predator behind bars again. Michael Christianson is now serving a 15-year prison sentence for Transporting Obscene Materials.

The La Porte man sentenced last month tried to have a book published, but it was not published because the book contained naked pictures of children. Christopher Throgmorton is credited for alerting local authorities about the man and assisting with the investigation from his research of Christianson.

“That’s what the community needs is people to be engaged. If you see something that doesn’t look right, by God, tell somebody. Thank you, sir,” Throgmorton said. 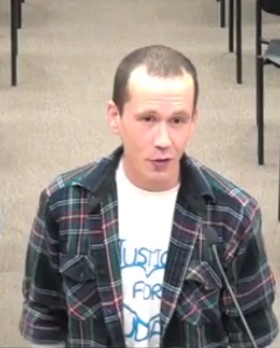 Throgmorton, who has two young children, said he did what everyone should do and thanked other people involved in getting the man off the streets.

“Our community did an outstanding job of spreading awareness through social media, a very powerful tool for the ordinary citizens when used properly, for letting this monster know that we are keeping an eye on things,” Throgmorton said.

Christianson was released in 2016 after spending 14 years in prison for child molesting. In addition to this current 15-year sentence, he will also be followed by a lifetime of supervision by the court’s probation staff.