(La Porte, IN) - It looks, drives, and is just as roomy as other mid-sized cars burning gasoline. That's what LaPorte Mayor Tom Dermody and other city officials are learning about an electric vehicle being tried out on police patrols for the past week.

Dermody on Wednesday began using the four-door car displaying the city's logo on his work-related runs for the next couple of days. He said the only difference was the electric car runs much quieter than traditional vehicles.

“It moves quickly. Fast,” said Dermody during a test run on Wednesday.

The electric 2020 Nissan LEAF is on loan from Crown Point-based South Shore Clean Cities, Inc. The organization, which promotes alternative fuels and other earth-friendly practices, allows many municipalities throughout northern Indiana to use the car for two weeks.

SSCC Project Manager Ryan Lisek said the idea is to change public perception that electric vehicles lack the power, size, and luxury of cars and trucks burning fossil fuel. The vehicle in LaPorte, for example, appeared to be the spitting image of a similar-sized gas-powered vehicle inside and out.

“It’s going to change the way Americans are going to start thinking about electric vehicles,” he said.

LaPorte Police Chief Paul Brettin said the car has the horsepower required for police work. Brettin believes that a slightly larger model with room for people arrested would probably be needed for patrols, but he can see the not too distant future just from his brief time behind the wheel.

After being parked outside in the cold for hours, the car also doesn't have to warm up 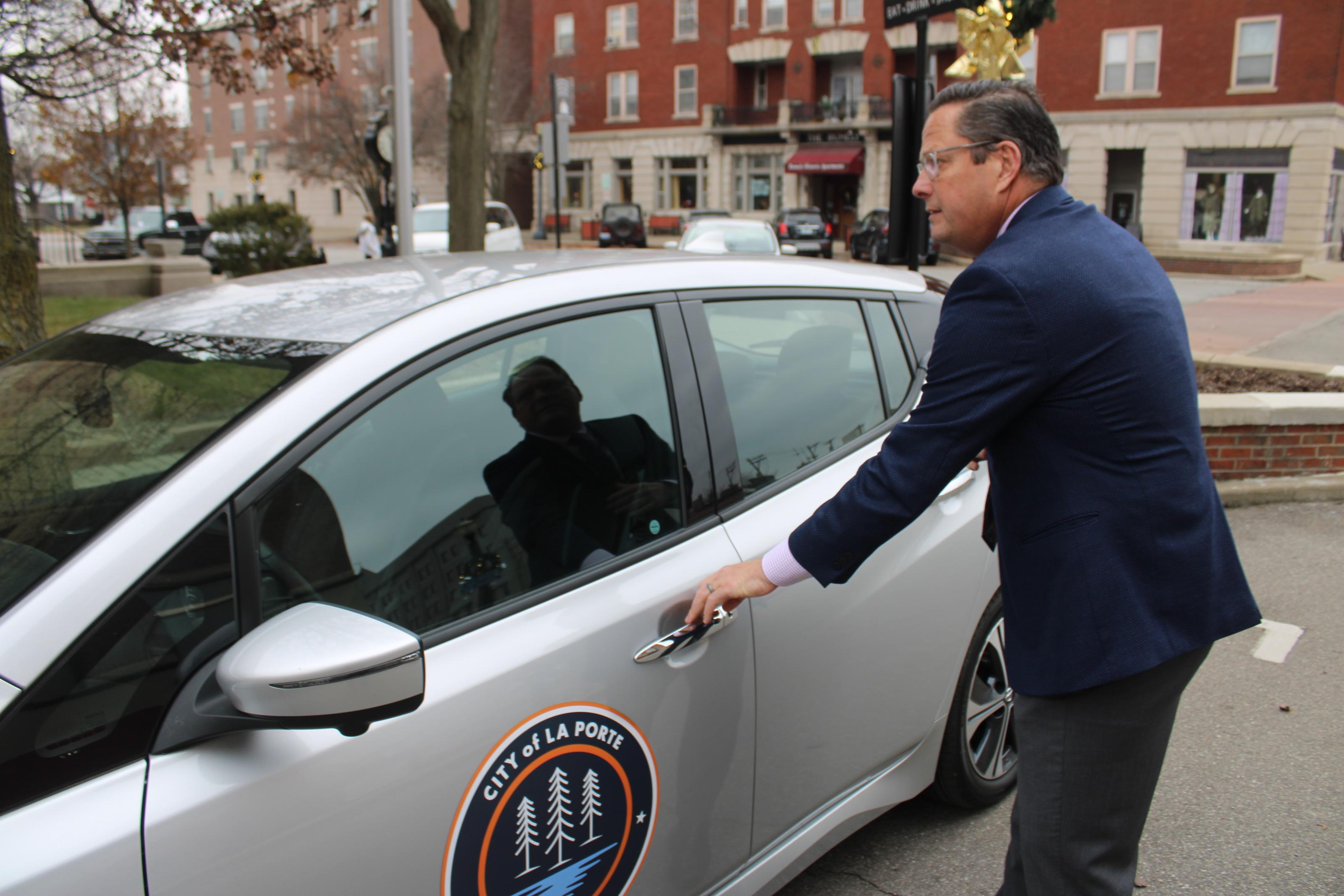 before producing heat through the vents in the dashboard.

Sarah Nimetz, the city's Sustainability Program Manager, said the car travels up to 200 miles on a full battery charge. The battery can be plugged into an electrical outlet at home, just like a television set or other appliances. Nimetz said it takes about 10 hours for a low battery to be fully charged in a 110-volt outlet, but just a half-hour or so at an electric vehicle charging station. She said the car has been impressive enough that the city might purchase several electric vehicles.

The sticker price for the car was about $36,000. However, the city could spend less money in the long run from not purchasing gasoline. She said electric vehicles also are known for requiring less maintenance.

All public transportation buses in LaPorte already run on cleaner-burning propane, and the wastewater treatment plant operates on solar energy. In addition, Nimetz said the largest sources of greenhouse gas emissions locally were recently identified. Most emissions in LaPorte come from the commercial and industrial sectors, followed by residential and transportation-related sources.

Nimetz said the findings would allow the city to positively impact climate change by developing and implementing strategies that work best here. Dermody said the city is doing other research in areas like water flow and tree canopies to further contribute to the fight against global warming.

“We’re constantly looking at new ways to do things. This is no longer the La Porte of old,” he said.