(La Porte, IN) - An iceless ice skating rink started going up Tuesday in La Porte after the dollars to purchase it were raised well before the deadline.

A goal of $35,000 in 35 days was surpassed on the 22nd day of the fundraiser by Bethany Lutheran Church when a $2,600 donation came in from Industrial Lumber Products, said Carrie Garwood, a church member. Garwood said she was only slightly surprised at how fast the goal was met because of how successful other church fundraisers have been in the past.

“It’s always amazing how many different people in the community come forward,” she said.

Money from the fundraising campaign spearheaded on October 27 was used to secure a $35,000 grant awarded by the Indiana Housing and Community Development Authority to pay for the rink. 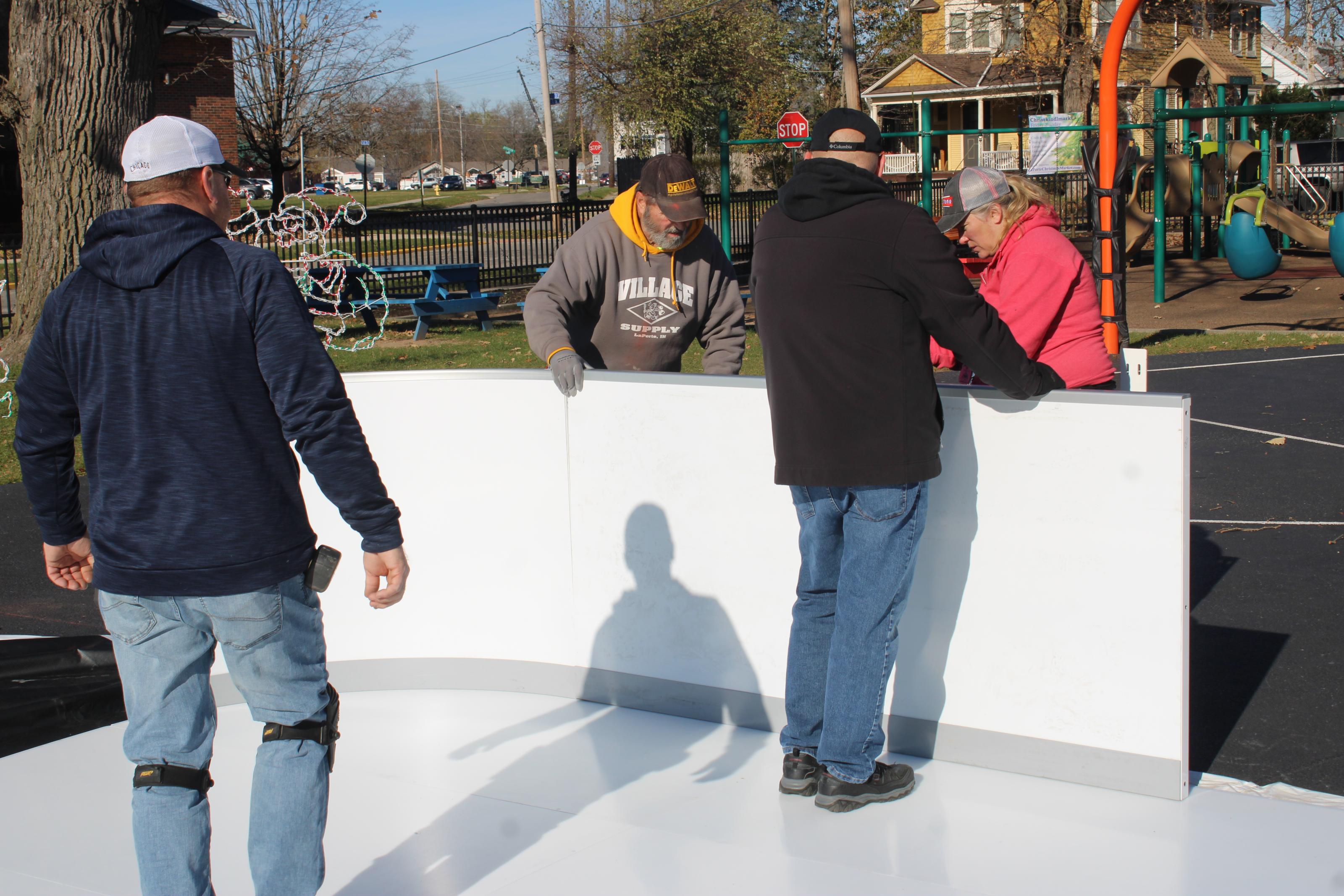 Garwood said the funds had to be collected by November 30 to secure the matching grant.

The rink started being assembled once a truck containing all the materials arrived just before 8 a.m. Beginning on Friday, the 1,300 square foot rink open to the public is at LaPark across the church from 102 G Street.

Church members assembling the rink were impressed by how closely the ninety synthetic surface panels fit together like pieces in a jigsaw puzzle. In addition, they noticed how similar to natural ice it felt.

“It’s extremely slick. You have to be very careful out there or you’ll fall down,” commented Tom Milo. Peggy Devine added, “They’re very slick. Very slick. It should be nice."

Meyer said the rink was purchased because of how heavily an iceless rink at the park was used during LaPorte’s inaugural Christkindlmarket sponsored last year by the church. In addition, he said it made sense to purchase the rink because the previous year, one cost $12,000 just to rent during the three-day outdoor market featuring craft and vendors, German bands, beer garden, freshly cut Christmas trees to purchase live reindeer.

The new rink will be open during the 2nd annual market this Friday through Sunday and throughout the winter from 10 a.m. to 6 p.m. People can bring their skates or choose from the 60 pairs of skates that came with the rink also at no charge.

Figure skaters and hockey players use the surface made by Glice, Inc. out of Switzerland during the off-season.

Meyer said an iceless rink was chosen because Old Man Winter isn’t always consistent with providing freezing temperatures for water to turn into ice. A refrigerated rink would have been too costly. The rink will be taken out of the park after winter.

One idea still being explored is putting the rink back together for use during the La Porte County Fair.

“You can skate on this year-round so if we get the assistance and ability to do that we’re going to try and pull that off for the summer,” he said.