(Westville, IN) - A LaPorte County man was hauling grain and moving dirt for a living when he added farming to his already busy schedule.

Mark Parkman still has the growing excavating business he started in 1988 with a used backhoe and $30,000 loan he obtained when he was 18. He and his family will also harvest 2,800 acres of crops this year from their farm on the same site as their excavating business near Westville. Over 150 head of Black Angus cattle are also raised on the property at 4052 South 1100 West.

“I feel like the Lord has kept an eye on me and helped me get to where we’re at,” Parkman said. 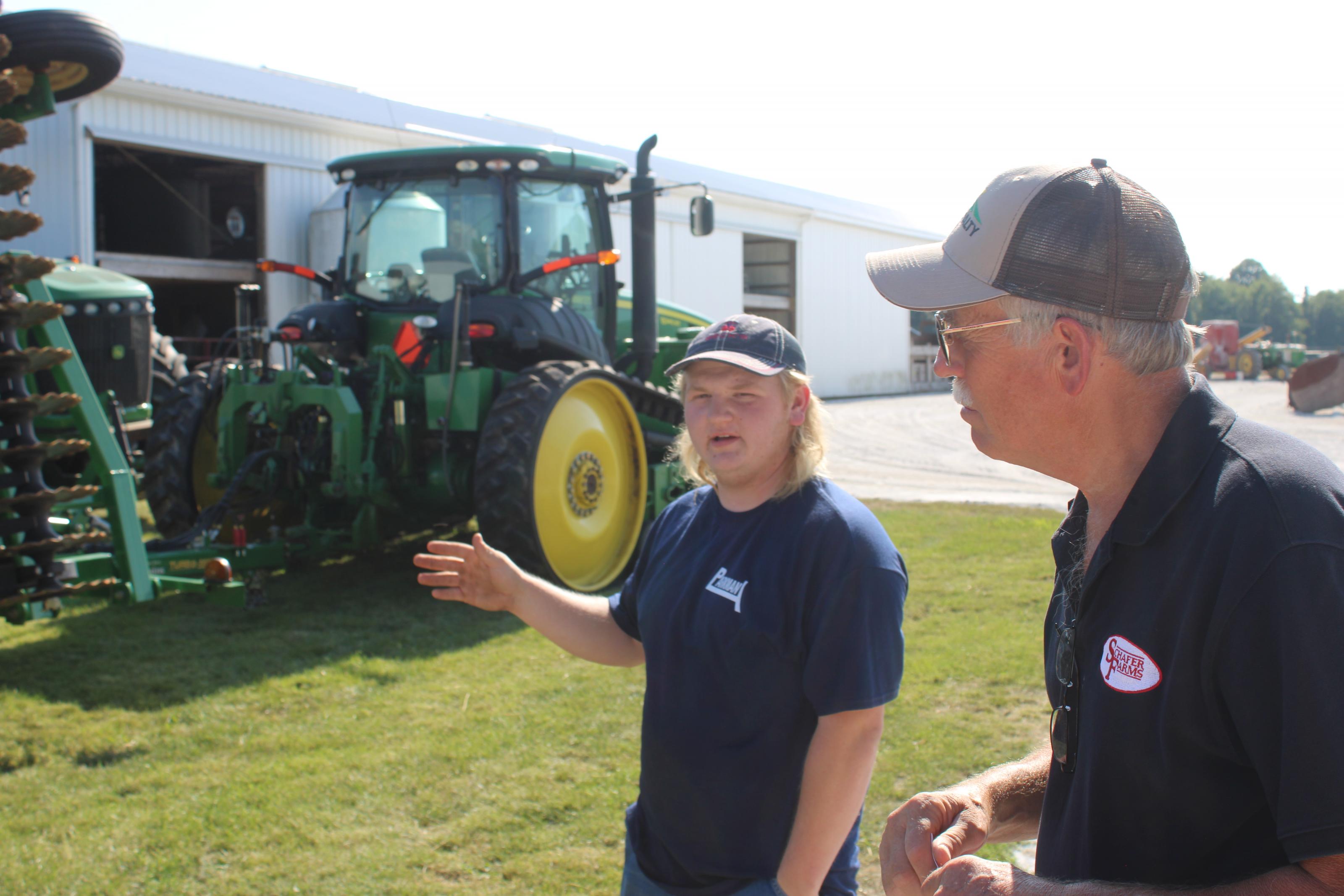 Parkman told his success story while hosting the annual Ag Tour and Barbecue sponsored by the LaPorte County Row Crop and Food Producers and the LaPorte County Farm Bureau Young Farmers. More than 150 people were educated about the farm at four stops during the tour, which ended with a pork chop dinner prepared by Row Crop members. The meal included sweet corn, baked potatoes, fresh salad, and ice cream.

One of the stops on tour featured a custom-built grain dryer that runs more efficiently than the smaller one it replaced. The new grain dryer featuring a 10,000-bushel holding bin was installed with help from Kevin Herschberger of Hostetler Grain Equipment in Nappanee. Herschberger said less hot air escapes from the dryer, allowing the grain to dry with less fuel. A computer also knows how long to run the dryer until the grain reaches the preferred 15-percent moisture level before storage.

Truck drivers can also fill up with grain and be on the road again in five minutes. "Time is of the essence in farming,” Herschberger said.

Another stop on tour featured a crimping machine used on cover crops for more effective no-till farming. Jacob Parkman said the machine crimps wheat growing out in the fields, so after the wheat is harvested, the lower half of the plants are dead when corn planted in the same ground begins rising from the soil.

Parkman said his family had practiced no-till farming for about the past six or seven years, and it appears to be making a positive impact in terms of less erosion and improved soil quality.

“So far, we find that seems to help out as it keeps going,” Parkman said.

Jacob and his sister, Mary, along with their mother, Nancy, help with the business side of the homestead.

Mark Parkman broke into farming under a land contract in 1995 when he and his wife were married. Five years later, the Parkman’s had purchased 500 acres of ground and added a combine to their other pieces of heavy machinery used for excavating and producing food. In 2008, the Parkman’s purchased two female Black Angus heifers for their daughter to raise in the 4-H program. She and her brother raised cattle during their 10-years in 4-H, and the herd has grown to about 165 head.

Parkman Excavating has seven employees, while the farm has two hired hands. The couple also owns close to 300 mini storage rental units near the farm and More & More Homebuilders in Wanatah. Jacob also raises about 10 feeder pigs he uses every year for meat.

Mark Parkman gave part of the credit for his success to people trusting him to pay back the loans they issued to purchase his first half dozen or so pieces of machinery.

He said the timing has also worked in his favor because work from his excavating business slows down just when he needs extra time to plant and harvest. Parkman also said he rarely buys new equipment, choosing what he believes are more cost-effective ways to get things done.

“We buy used equipment in good shape that we can work on,” he said.