(La Porte, IN) - A rookie at chicken flying came away from this week’s La Porte County Fair as grand champion.

“It feels awesome and I’m so excited,” said Katelyn Peterson, 14, of La Porte.  Her Welsummer chicken, “Goldy,” won the bantamweight division with a 39 foot long flight in the draft horse arena next to Pioneer Land.

The winner in each of four weight divisions returned to 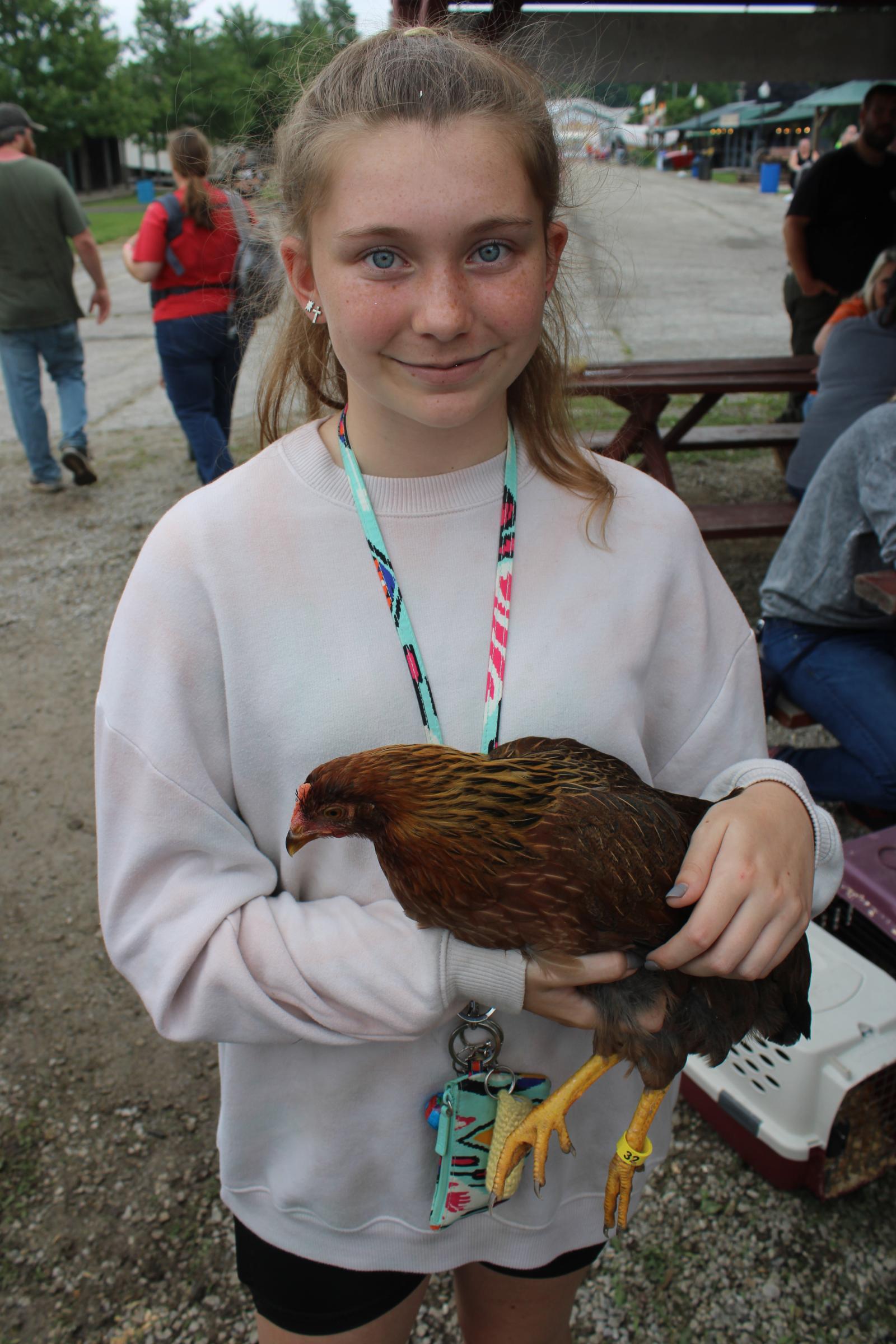 compete for grand champion and Goldy outdistanced them all with a flight of just over 22 feet.

Peterson, a six-year member of 4-H, said she didn’t expect her bird to win but knew the hen had talent from flying over a fence to eat corn belonging to her neighbor’s chickens.  She was driven to enter the competition for the first time from watching a chicken belonging to her sister compete in the popular contest during the fair two-years ago.  “I thought it was cool,” she said.

The reserve grand champion was a Rainbow chicken winning the heavyweight division with a flight of just over 25 feet.  The chicken, “Fire,” owned by Nichole Brown, 11, flew slightly more than 18 feet in the grand champion portion of the competition.  Brown, who recently moved to South Carolina from La Porte, made the drive with her family to take part in the contest for her first time.  “It just sounded like something fun and Fire is a little stinker so I thought she would enjoy it,” she said.

Chickens weighing more than five pounds are not eligible to compete.  Each chicken in the competition was gently shoved from behind out of a wooden mailbox resting on a more than 10 foot high platform.    “We fly nothing over five pounds because it could endanger the bird or breaking a leg or something and we don’t want that,” said Carolyn Krause, who was in charge of the chicken flying competition hosted by the fair’s Poultry Committee.

The competition featuring a whopping 38 chickens this year has been a staple at the fair since the late 1980’s.  Krause said some chickens in previous competitions have flown greater distances including a few that made it in the air to the draft horse barn some 100 feet away.

Spectators always get a kick out of the many chickens that ran away after landing then have to be caught by volunteers scrambling to catch the fleet footed birds with nets.  “The crowd always loves to see them run,” Krause said.

Krause said most chickens are better gliders than flyers.  She said chickens could fly greater distances, though, if they flapped their wings more to build up muscle strength.  However, Krause said chickens typically use their wings only when feeling threatened by a predator or some other potential source of danger.  “They just walk around all of the time. They’re out of shape,” she said.