(La Porte, IN) - A La Porte official heavily criticized last year for publicly denouncing the LGBTQ lifestyle joined in the celebration of a pride flag presented to the city.

City Councilman Roger Galloway said his personal views have not changed but he stands by the effort of the LGBTQ community to be accepted.  “I believe my opinion, my religious beliefs are the same but we’re all in this together,” he said. 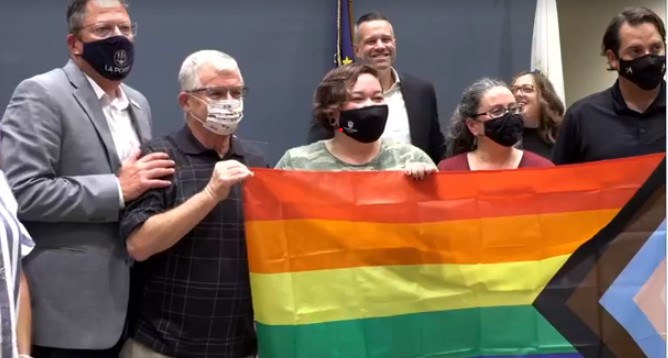 The pride flag was presented Monday during the La Porte City Council meeting by Elissa Affeld, a member of the local LGBTQ community and the city’s Diversity and Inclusion Committee.  She spoke about acceptance as part of June being Pride month dedicated to celebrating LGBTQ communities worldwide.

Affeld blamed lack of acceptance for LGBTQ members having much higher rates of homelessness, mental health and substance abuse issues.  She also expressed a desire for the city to fly the flag during the remainder of Pride month “as a symbol to those in the community that the city of La Porte is not only diverse but accepting and inclusive.”

Whether the flag will be flown by the city was not mentioned.  Galloway said he has no problem with the flag being flown for the rest of the month but is concerned more flags would have to go up, if requested, to avoid other segments of the population feeling discriminated against.  “If you fly one then you have to fly everybody’s,” he said.

Galloway, a veteran of the Vietnam War, said he can relate to the effort by the LGBTQ community for acceptance because he and other soldiers came home from the losing battle feeling shunned by society.  “We’re still fighting for recognition.  I’ll stand with them.  Things are changing,” he said.

In July, Galloway during a city council meeting told several LGBTQ members asking for community support “you know that’s against The Bible.”  “Anybody ever read The Bible,” he said.  He later apologized after his comments were met by considerable backlash from Mayor Tom Dermody and other members of the city council.

The Diversity and Inclusion Committee, already under consideration, was later formed to promote La Porte as a welcoming community.

Galloway said everyone is entitled to their opinions but he has since learned the beliefs of an elected official can’t get in the way of the job.  “They all don’t believe the same or live the same.  You got to represent everyone. That’s the way it is,” he said.