(Michigan City, IN) - Major springboards to a brighter future are unfolding practically all at once in Michigan City.

Work is beginning on the double track and a new train station with 12 stories of upscale apartments on 11th street. A developer will also build a seven-story housing development at 8th Street and Michigan Boulevard.

“Workforce housing is defined as quality living for those having essential and professional jobs with incomes ranging to 50-percent to 120-percent of the area median income,” Parry said.

That development will occur at a former Chrysler dealership site. Parry said the 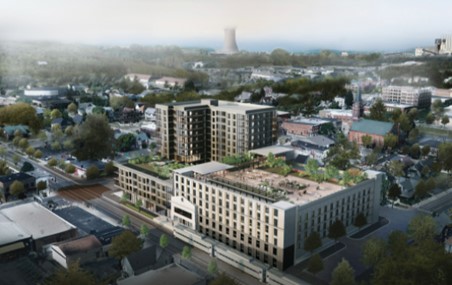 construction would be done in phases by one of the nation's largest private apartment building owners.

He expects a groundbreaking on the $35 million projects to occur sometime within the next couple of months.

Parry said a Memorandum of Understanding with a nationally renowned developer was recently signed to construct a $150 million high rise structure on U.S. 12, where the police station and News Dispatch were formerly located.

A Fortune 500 company also has plans to go up on U.S. 20 across from Evergreen Plaza on land the city is moving toward annexing. So far, the company's name and other specifics have not been disclosed.