(Michigan City, IN) - A wild turkey is no longer posing a traffic hazard at a busy Michigan City intersection.

The problem for about the past month was taken care of Thursday by conservation officers with the Indiana Department of Natural Resources.

James Brindle, Director of Communications for DNR out of Indianapolis, said the officers happened to spot the turkey before 9 a.m. in the middle of Michigan Boulevard and Johnson Road. The officers ventured out into the intersection where the bird had been coming and going. Unfortunately, the adult-sized bird followed the officers just off the side of the road where it was euthanized.

Brindle said he did not have more specifics on how the turkey's death was carried out. 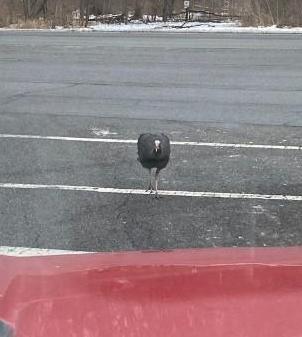 "I don't have those details," he said.

The decision to euthanize was made last week when the turkey was declared a threat to public safety, said Steve Backs, Wildlife Turkey Biologist for DNR out of downstate Mitchell.

According to police, some motorists starting about a week before Christmas came to a complete stop to avoid hitting the turkey. However, some travelers concerned more about the bird's safety ventured on foot into the intersection to try and shoo the turkey back into the surrounding woods.

There were also complaints of the turkey attacking vehicles and making some people feel threatened, police said.

In most cases, Backs said DNR chooses to euthanize turkeys and other wildlife that pose a risk to humans, especially when the source of the problem is minimal.

“What we’re more concerned about is somebody getting hit by a single bird in the roadway,” he said.

Backs believes that the turkey, if relocated, likely would have become a nuisance or safety risk elsewhere.

According to Backs, wild turkeys making a road a hangout does happen, occasionally, usually in rural areas. They can be drawn to kernels of grain dropping from trucks heading to an elevator regularly. Eventually, wildlife gathered in one spot can become a source of food for other more dangerous animals.

“It’s kind of like the water holes in Africa. If everything is going to the same water hole, guess what? Predators are going to be there for a free meal,” he said.

Backs could not explain the behavior of this turkey which was in a more urban setting.

Warren Smith said he tried spotting the turkey every day while passing through the intersection to work at B & E Marine in Michigan City. But, the Coolspring Township volunteer firefighter only laid eyes on the turkey Wednesday morning for the first time. After stopping for a red light, Smith said the turkey was approaching when he snapped a picture of the bird through the windshield of his truck.

The turkey moved closer to his front bumper and then to the side when the traffic signal turned green. Smith was sad about the turkey's death but understood the decision.

“You don’t want the thing to cause any accidents or bodily injury to anybody.  The turkey is not worth it,” he said.