(La Porte, IN) - The LaPorte County Commissioners on Wednesday condemned the LaPorte County Auditor for late payment. They urged him to "cease and desist" from utilizing his elected office to settle personal and political scores.

The 2-to-1 vote for a resolution directed at Tim Stabosz again shed light on what's been a tumultuous political divide filled with allegations of corruption since the first of the year. Commissioner Joe Haney, an ally of Stabosz in demanding change, said the resolution was "political garbage" before casting the only vote in opposition.

According to the resolution, Stabosz was late in making an over $600,000 bond payment due on July 15th. The payment was for $19.4 million in financing secured for the nearly finished renovation and expansion of the courthouse in Michigan City.

The resolution alleges Stabosz was not on time with the payment because he seems more intent on using his office to wage a personal and political vendetta. As a result, LaPorte County is in jeopardy of losing its A+ bond rating from Standard & Poor, one of the largest credit rating agencies connected to Wall Street.

The resolution also condemned Stabosz for "attack-dog style" postings on his Facebook page the night before Thanksgiving.

Stabosz was also accused of using Facebook to encourage his readers and followers to "mock" Commissioners Rich Mrozinski, Sheila Matias and LaPorte County government attorney Shaw Friedman and to continue stating "how immoral, indecent, corrupt and pathetic they are." In response, Stabosz defended his postings and said the resolution was an effort to embarrass him.

Stabosz said he was speaking to one individual and that is the anonymous person who is publishing a flyer portraying Mrozinski, Matias and Friedman as puppets and a puppeteer.

Stabosz said he told that person in his post to mock them all he wants in future publications but to do it within the confines of election law.

"They twist the context in their resolution to make it sound like I'm going on Facebook telling people and the public to mock Rich, Shaw and Sheila like I'm egging people on. That is not the case," he said.

Stabosz, who took office in January, said the late payment was from the bank sending a notice to pay at the deadline to the former Auditor instead of him. After learning about the mistake, Stabosz said he made the payment after returning from an auditor's conference the next day.

In February, a Defamation of Character lawsuit was filed against Stabosz by Friedman for alleging Friedman controls the county government by controlling and manipulating elected officials, including Matias and Mrozinski. 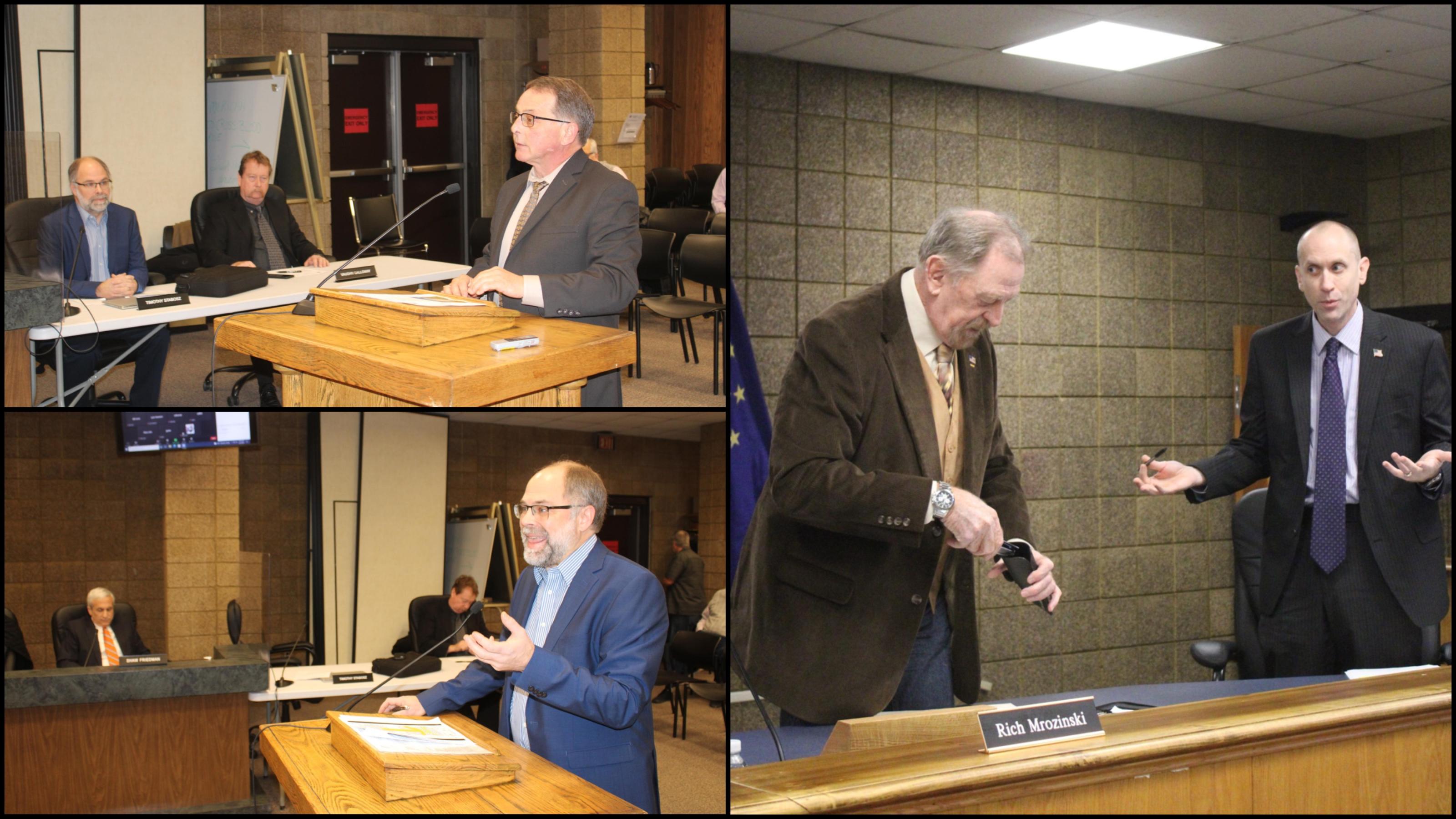 A hearing was recently held by a judge on a motion by Stabosz to dismiss the case. The request has not been decided.

Several weeks ago, the commissioners also sued the Auditor for ignoring their orders to pay Friedman's law firm the total amount owed for work performed for the county.

Stabosz said he questions whether some of the billings were for actual legal work. He has requested more information about the billing, which Friedman has not given him. Friedman and the Commissioners maintain that only the Commission can request more information from Friedman, not the Auditor. However, unless the information is provided, Stabosz said he wouldn't pay Friedman & Associates for any future billings on work for the commissioners. The amount being withheld from the county attorney has topped $25,000.

For the second time in recent weeks, attorney Dave Ambers of LaPorte called for an end to what he described as a "sideshow that you can't even see at the circus." Ambers said the constant fighting might cause investors showing interest here to go elsewhere.

“The back and forth bickering has got to stop. It's embarrassing,” Michigan City area resident April Daly added.

After the Commission passed the resolution, the backbiting didn't stop with Haney casting doubt on a claim made by Matias and Matias correcting Haney after he mispronounced her name. Mrozinski also criticized Haney for being the only member of the Planning Commission last week to vote against a proposed $15 million development at U.S 20 and U.S 35. Mrozinski cautioned Haney and Stabosz to choose their words more carefully in any future social media postings.

“As a man, I do have certain limits of what I will accept and what I will put up with without taking some sort of action.  Trust me, boys, you don’t want to go there,” Mrozinski said.

Haney said he didn't vote against the project.

He and two other members of the seven member Planning Commission voted against a Tax Increment Financing District being created for the project.

Money generated by the increase in value of a property from being developed inside a TIF District is captured and used to pay for things like water and sewer line extensions to where the construction took place.

TIF money is used strictly within the boundaries of the district.

None of the dollars go into a municipality's general operating budget.

"At a time when we need tax monies for funding and salaries for public safety,  like EMS and the Sheriff's Dept,  we cannot afford to shortchange the taxpayers or our public coffers right now," Haney said.