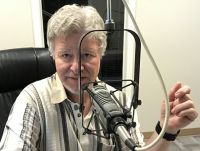 Rik Anthony is a Hobart High School grad and radio veteran of over 40 years. Rik served for 20 years in the United Air Force, getting his start in radio with the Armed Forces TV and Radio Service (AFTRS). Rik was with the All Star Radio Network for 19 years as a writer, character voice and host of several nationally syndicated radio programs, including Back in the Pits with Rik Anthony. Rik announced Drag Races, NASCAR truck races and an Indy car race as the voice of Gateway Motorsports Park outside of St. Louis in 2016 and 2017. Rik moved back to NW Indiana following the loss of his wife in 2018. Rik loves to travel, photography, the Arts, the Chicago Cubs, and good food. Name an artist, Rik has a story or two about them, He invites you to check out his show weekdays from 2p-6p and Saturday 9a-2p on La Porte's Rock Station - the New Rock 106.5