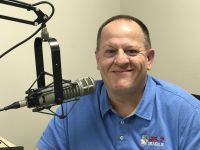 Jeff "Wugi" Wuggazer has been working in broadcasting for over 25 years. Jeff started as a board operator running sports broadcasts and also serving as a weekend on-air host on 96-7 The Eagle. Jeff was also responsible for training new production staff members. Since 2016, Jeff has been promoted to Director of Production for Spoon River Media and a weekday afternoon on-air show host. Now with the addition of Rock 106.5 LaPorte's New Rock Station, Jeff has been a weekend afternoon host proudly rocking his hometown. Recently, Jeff has been promoted to Director of Operations for both 96-7 The Eagle and Rock 106.5. In his free time, Jeff enjoys music, movies, racing, camping and sports, especially the Chicago Cubs, Blackhawks, and Bears.