(La Porte, IN) - A Michigan City woman has become a light for others after putting her foot down on the life she was leading as a drug addict.

Amy Block, 39, is the first graduate of the Family Recovery Court, whose mission is keeping parents and their children together and in a healthy environment.  By successfully completing the therapeutic program, Block regained full custody of her one-year old daughter. 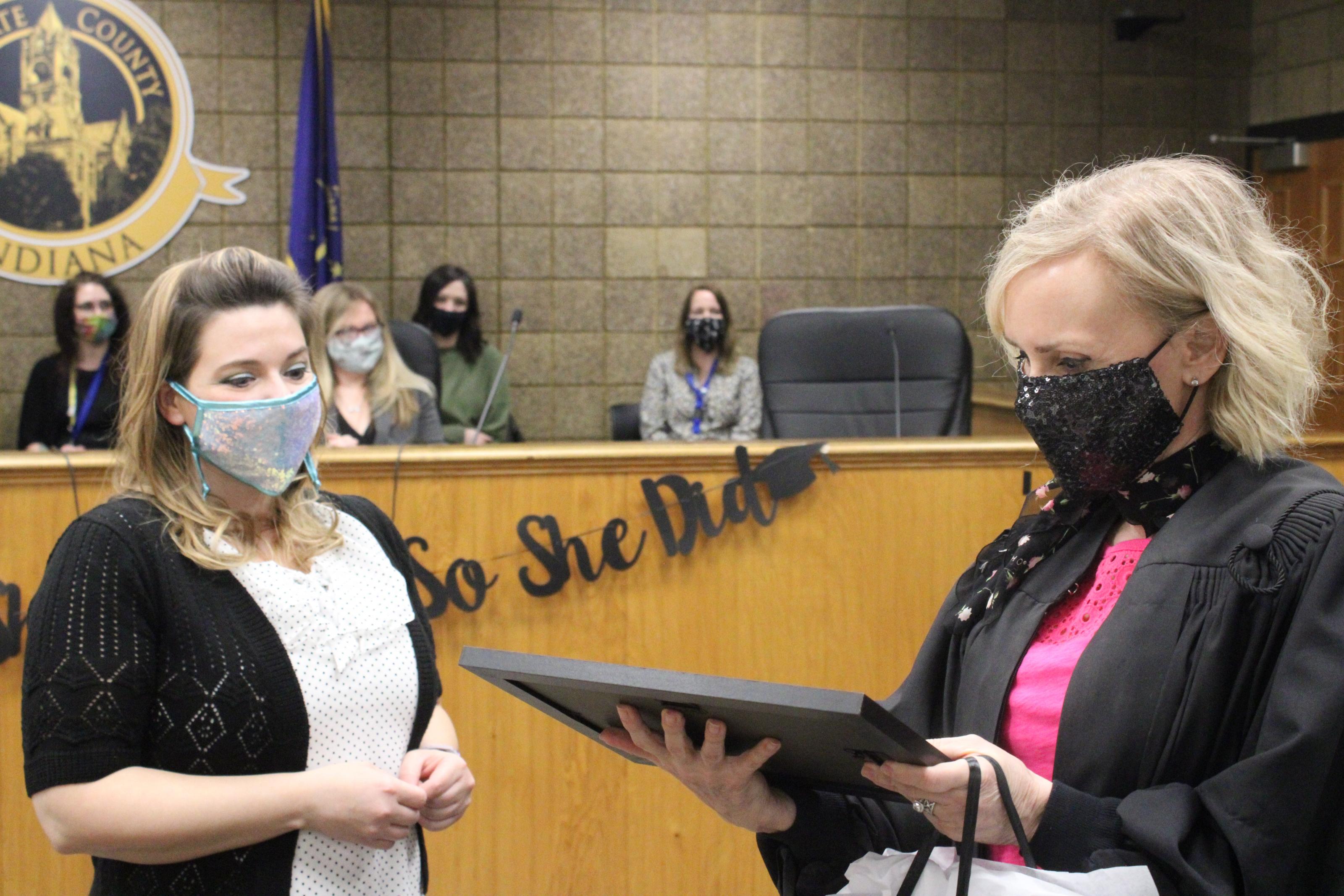 substance abuse treatment facility in South Bend.  Block said not using drugs as required in the program is the longest she’s been clean since age 11.  “I feel wonderful.  I feel like life is worth living nowadays and I feel hopeful for the future,” she said.

Eight other parents from LaPorte County are working their way toward graduation, said Emily Back, Coordinator of Family Recovery Court.

The program was launched in September after a year of talks between LaPorte Circuit Court Judge Tom Alevizos and his court magistrates, Pamela Munsey and Jonathon Forker.  They were looking for a better way to reunite and keep together more families struggling or torn apart by drug abuse.

Back said services were already being extended to at-risk families by the local judicial system and state.  She said Family Recovery Court brings various behavior and mental health professionals from both arenas under one umbrella to better address the issues of each parent.  “We built this team.  We talk to each other on a regular basis which is something that’s not always done,” Back said.

She said referrals to FRC are made by the Indiana Department of Child Services and judges overseeing complaints filed against parents for the care given to their children.  Each individual undergoes a clinical assessment to develop strategies for treatment.  Any factors contributing to drug use such as difficulties with employment and housing are also addressed as part of the treatment.

Back said the up to 24 month program is voluntary but parents not enrolling could run a greater of risk of losing or not regaining custody of their children.  Drug use is prohibited.  Violators are placed into enhanced treatment programs rather than being punished, she said.

Betsey Black, a DCS case worker, said substance abuse treatment is the primary focus but training in areas like parenting and job skills are included, if necessary.  Employment can also be required to take part in the program.  “If they’re able to survive on their food stamps or their social security or disability, whatever, we allow that, too.  We want the focus to be the recovery and we want to make sure they’re able to care for their child appropriately,” she said.

Block said her battle with substance abuse in more recent years was mostly with heroin and methamphetamine.  During her Tuesday graduation ceremony, she was praised for wanting and being committed to change.

Block said her attitude finally reached that point after so many trips to jail along with disruption and emptiness her actions were causing at home.   “Just being tired of the old life style and outcomes like family.  It’s pretty lonely being an addict,” she said.